Are you sure you want to remove the following product from the cart?

Are you sure you want to remove the following product from the wishlist? 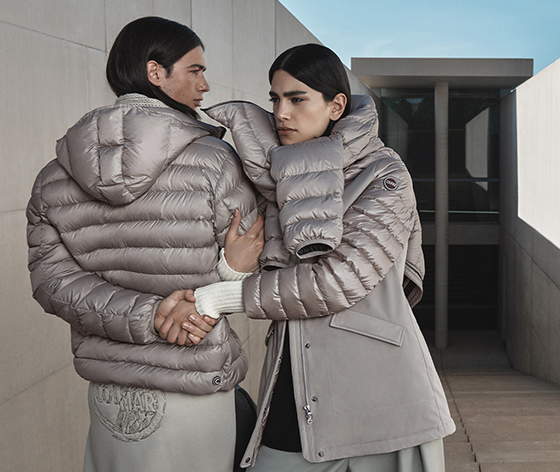 Find out about the loyalty program

Join the Colmar Club Alta Quota. Discover all the advantages and begin your journey to reach the Vetta Colmar.
Join the club

THIS HAS BEEN COLMAR SINCE 1923

Mario and Irma Colombo founded Manifattura Mario Colombo & C. in Monza, with a strong bond to the local community, then important for the production of felt for hats and gaiters. The latter were the first important product made by Colmar. The brand name was created in the same period, jotted down on a cigarette packet during an exercise in the imagination amongst friends at the bar and it was made up of the surname and the first name of the founder: COLombo MARio

The company grew despite the difficulties of the period, such as the 1929 Great Depression and the socio-political situation of those years, like the sanctions on Italy because of the war in Ethiopia, which had a negative impact on businesses. Production was converted and work overalls started to be made with a special treated cotton. This was suitable, as was to be discovered, for skiing pioneers like Leo Gasperl (champion of speed skiing), in practice, the first “testimonial”, for whom Colmar made the Thirring, a cape which, inflating on the back, looked like a bat’s wing, the nickname that was used to identify the product.

The 1940s. Skiing in Colmar’s history

The premature death of Mario left the task of continuing the company to the courage of Irma and the force of their sons Giancarlo and Angelo. The difficulties brought by the end of the Second World War were overcome by the award of a contract to produce Sahara jackets for the French Foreign Legion. Colmar began its relationship (which was to last until 1992) with the Italian Federation of Winter Sports (FISI) in the Pool Italia, the group of suppliers of the team, but above all with its champions, one above all: Zeno Colò. The champion’s desire for pieces that gave increasingly higher performances and an intuition of Irma, who inserted stretch nylon, typical of women’s corsets, into the sides, led to the creation of the “guaina Colò”, a jacket that was to remain in the collection until the 1970s.

The 1950s. Colmar in the history of skiing

In 1952 Zeno Colò dominated downhill skiing in the Oslo Olympics, wearing the jacket he and Irma had made and Colmar entered the world of skiing as a universally recognized brand through the front door. The company expanded thanks to Giancarlo and Angelo who added the commercial business to production, becoming distributors in Italy of major foreign brands such as Mizuno, Elan, Adidas and Lacoste, to mention only a few. Colmar also grew in Italy and started to export abroad.

Winter sports holidays were enjoying a huge popularity, the Italian economic miracle was at its height and skiing in the most exclusive resorts became a real lifestyle. At the same time, research continued, with Giancarlo’s and Angelo’s curiosity leading the company to develop products that gave increasingly higher performances for skiers and in particular for their champions. It was in this period that a special Colmar ski suit was created with which Luigi di Marco beat the speed skiing record in Cervinia in 1964.

"SKIING HAS BECOME THE SPORT OF THE MOMENT AND COLMAR IS UP ON THE PODIUM WITH THE ITALIAN STAR PLAYERS: A DREAM CALLED BLUE AVALANCHE"

IN THE HISTORY OF SKIING

1930S. Made especially for Leo Gasperl, this cape which inflates on the back, also called the Bat, is the one with which the champion competed in St. Moritz for the speed skiing record.

Late 1940s. An enormously successful waterproof poplin anorak. Its creation was, to say the least, maniacal: the specifications even included how many stitches there had to be in one centimetre of seam.

1950s. Sides and elbows in two-way stretch tulle which made the now famous jacket invented by Zeno Colò and by Irma Colombo the first aerodynamic jacket. The idea came from inserting parts of Lycra, present in women’s corsets then in use. A piece that remained in the collection for almost twenty years.

1960. For the Olympics of Squaw Valley, Colmar supplied the team with a whole suitcase of thermal wear: down jackets, over-trousers and for the first time leggings with the side bands made from elastic satin (used in brides’ gloves), which is anti-friction and waterproof.

1970s. A white sheath with padding in the Italian colours on the sleeves: Stricker immediately gave it the nickname of “ceffa” (“smasher”) and thanks to the success of the Valanga Azzurra (Blue Avalanche), it became the World Championship jacket.

1985. Created especially for the World Championships in 1985, this jacket is filled with down and has leather inserts. It is not only technical, but also of great style and design.

The 1990s. It was the colour block jacket that was wildly successful on the slopes in the 1990s. Sobriety was set aside and free rein was given to combinations of colours that were apparently impossible. The White Circus was also coloured by the victories of champions such as Tomba and Compagnoni.

2016. Colmar presents the first ski jacket made with graphene powder in the lining of the back. With the same innovative material, it also made the racing suits of the French team who, wearing it in the finals in St. Moritz the same year, achieved a fantastic triple win.

The 1970s. The dream of the Valanga Azzurra (Blue Avalanche)

These were the years of the victories of many champions such as Gustav and Roland Thoeni, Piero Gros, Paolo De Chiesa, Helmut Schmalzl, Fausto Radici, Herbert Plank, Erwin Stricker and Tino Pietrogiovanna. Skiing became a national sport to all effects and Colmar stood on many podiums including that of the Olympics. The racing ski-suits entered the wind tunnels at Fiat and Moto Guzzi, the fabrics were tested by the Politecnico of Milan. The giant slalom suit was renamed “la ceffa” (the “smasher”) by Stricker, to emphasize its audacity. These were also the years when the famous claim “In case of snow” came into being, inspired by the road sign for fitting snow chains.

The 1980s. Colmar and communication

These were the boom years for advertising, for communication agencies and the company started to buy space on the ski slopes to make the most of the commercial potential of television and reach viewers and consumers. In 1985, Colmar sponsored the World Championships in Bormio and produced a jacket especially for this occasion. The period also marked the advent of modernity for the brand: the famous red and blue circle was replaced by the name Colmar preceded by a stylized snowflake, created by a firm of Swiss designers who had recently also restyled the Alitalia logo.

The 1990s. The years of projection

After a decade of weak results, thanks to the class of Deborah Compagnoni, Manuela di Centa and the strength of Alberto Tomba, together with many others, the world of skiing started talking Italian again. In 1992, the relationship between Colmar and FISI came to an end but not the one between Colmar and the world of races, where the brand continued to be present in the classics of the World Cup. In 1999 the first flagship store was opened in France, in the exclusive resort of Megève, the first of a long series with, today, stores in Milan, Paris, London and in the best known skiing resorts such as Cortina, Courmayeur, Kizbühel, Chamonix and many others, for a total of 15 flagship stores.

The sporting offer of Colmar was extended and the Golf Line was introduced. The greatest champions appeared on the green carpet of the European Tour wearing pieces by the Monza-based brand: Edoardo Molinari, Marco Crespi, Andrea Pavan and Alejandro Canizares are only some of the players who over time have been testimonials.

In the meantime the brand once again played a leading role in the World Cup with the exuberance of Chemmy Alcott, a star skier from Great Britain and the maniacal precision of Ivica Kostelic who brought the company back to the summit of the White Circus.

In the meantime, Colmar made its entrance into the world of lifestyle with the creation in 2009 of the Colmar Originals line: the offer was made up of the now famous quilted jackets, definitely more urban in style, which became an enormous success with the public. The collection was to be expanded over the years with sweatshirts, T-shirts and shoes. 2011 was a year of celebration for Colmar which, together with Ivica Kostelic, won the General World Cup. In the same year Colmar started its relationship with the FSS (Fédération Française de Ski) which consecrated a generation of talents like Alexis Pinturault, Tessa Worley, B Grange and Julien Lizeroux.

TODAY. Roots in the future

In this decade the brand has grown both on the sporting side and in lifestyle. The brand has further explored research both in increasingly technical and performing fabrics to help the sporting performance and in the world of fashion. Important collaborations have started with companies such as Directa Plus, which produces Graphene (Colmar was the first company to apply it on a fabric) and with designers of international fame: capsule collections with Au Jour le Jour, Shayne Oliver and White Mountaineering.

The company is still a “family business” and is run by the third generation, the grandsons of the founder, Mario, Giulio and Carlo, and it still has strong bonds in the Monza area.